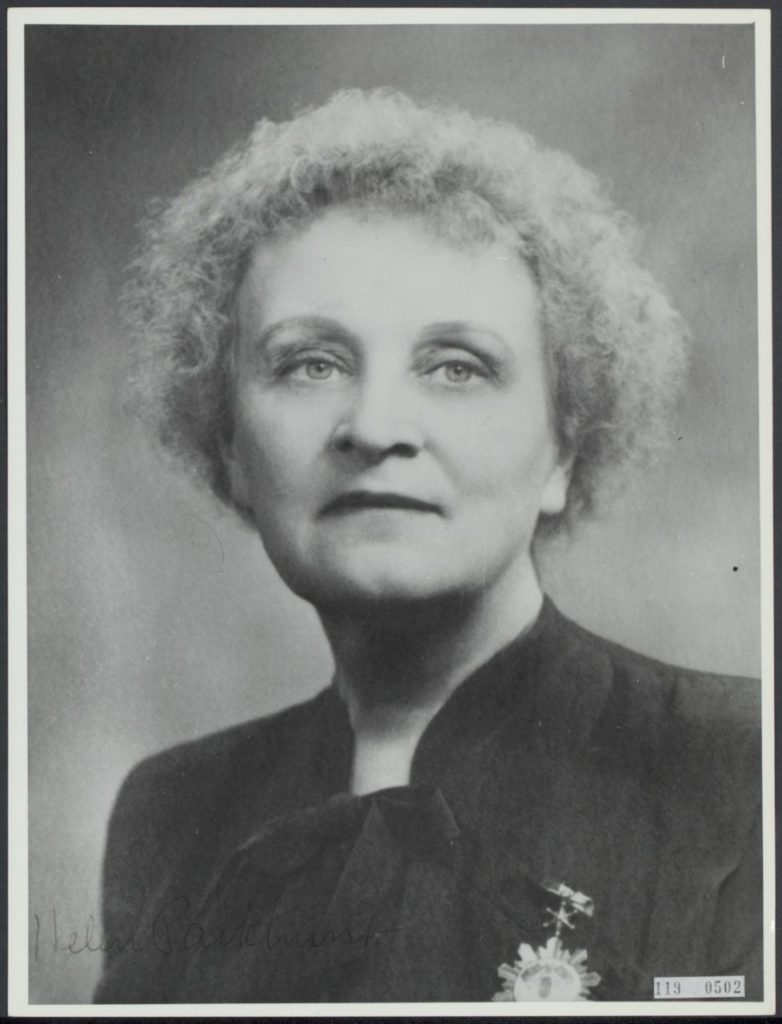 Parkhurst graduated from the River Falls Normal School of Wisconsin State College (1907), did graduate work at Columbia University, and studied at the universities of Rome and Munich and with Maria Montessori. Much later, she earned a master’s degree in education at Yale (1943) and became Yale’s first fellow in education.

She taught briefly in Wisconsin, moved to Tacoma, Wash., in 1909, and returned to teach at Wisconsin Central State Teachers College (1913–15). After further work with Montessori in Rome, Parkhurst set up her own school in New York City in 1916.

In 1918 she drew upon an experimental plan she had developed for the high school in Dalton, Mass., and began implementing it on a contractual basis with students in her New York school. Pupils worked in “laboratory brigades” on specific assignments for which they contracted. There were no tests or examinations, and external discipline was minimal. As they worked on assignments, students submitted progress reports to teachers.

Parkhurst remained headmistress of New York’s Dalton School until her retirement in 1942. Over the final three decades of her life she lectured, helped institute her plan throughout the world, wrote books, and produced radio and television shows for and about young people. 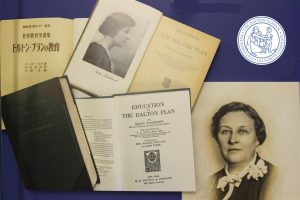 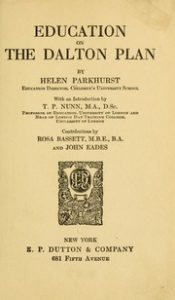 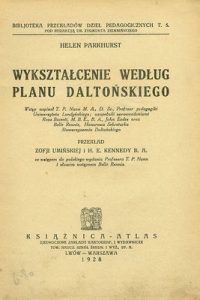 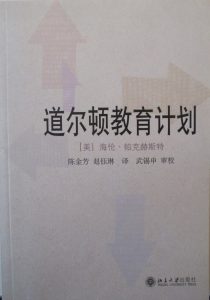 Click here for the on-line version: Education on the Dalton Plan (1922),

Other books of Helen Parkhurst: 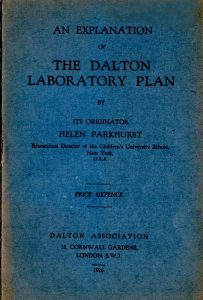 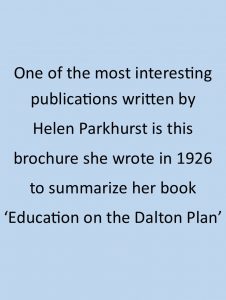 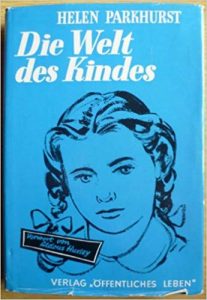 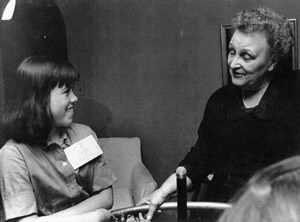 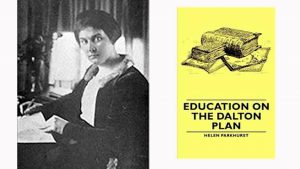 The genesis of the Dalton Plan
by Dr. Agata Röhner – Sowińska

Undoubtedly, one of the pioneers in the field of educational innovation was Helen Parkhurst, who initiated the Dalton Plan. Differentiation of working with children started to be implemented in 1905, when as a young teacher, she was working with several classes at the same time. That was the moment, when she came up with the idea of creating individual educational path, tailored to the need of each student.

She asked the older students to help younger and with their help she has transformed a school workshop into the classroom, which every class corner was dedicated to different school subjects. The main goal of Parkhurst was to replace mass learning into independent, enabled children learning on their own pace. encourage cooperation, to introduce a self-assessment of every student, to motivate every pupil.
In 1905, Helen Parkhurst studied at the Teachers’ College in River Falls, then worked as a teacher for several years, as well as a “counsellor” in several schools in the region. In 1910, she moved to Washington State, where she began her first educational experiments in Tacoma. In 1913 she returns to Wisconsin and studies at Central Teacher’s College in Stevens Point.

This is the time when Maria Montessori’s vision on education became extremely popular. Parkhurst, then very interested in this type of education, takes a study vacation and leaves to Rome to cooperate with Maria Montessori. Parkhurst is becoming more and more enthusiastic about this type of education; therefore she decides to cooperate with Montessori, spreading her ideas in the United States. Together, they succeed in creating the Montessori class exhibition at the world exhibition in San Francisco in 1915. While the proposition of Parkhurst and Montessori pedagogy became more and more popular, there appeared a growing difference in opinions among the several groups of Montessori supporters concerning the educational concept. For Parkhurst, it is a moment to give up and restart her own educational experiments in New York. At that time, she created a “university for children” that develops in an exclusive, innovative school that still exists as the “The Dalton School” in New York.

Dalton Plan Pedagogy is a scheme of educational reorganization developed by Helen Parkhurst, then a budding teacher at a school in Waterville, Wisconsin. In 1922 Helen Parkhurst published “Education on the Dalton Plan”, a book that was immediately translated into fourteen languages. In many respects, this book is universal and timeless, inspiring teachers around the world both now and then. At that time, Parkhurst was the Director of the University School for children. It was a small but prosperous school for children in the west, which was later transformed into The Dalton School.

The main assumption of this school was: “In the past, a student went to school to get what the school had to offer him, nowadays the student goes to school to satisfy the defined needs of his own development” . It needs to be added that Parkhurst was the creator of the teaching system known as the “Dalton Laboratory Plan”, which was inspired by the work of J. Dewey and many years of cooperation with M. Montessori and was successfully implemented at a special education school in Berkshire, then in secondary school in Dalton, United States.

The main assumptions were presented in the elaboration of “Education on the Dalton Plan”. The problem was diagnosed by Parkhurst at the beginning of the last century. Dissatisfaction with the educational system at the time resulted in the creation of a methodology of “teaching entire classes” in which the idea was based on three elements: freedom, independence and cooperation (The word freedom was later changed into “responsibility” by Hans Wenke, Dutch pedagogue).

The general concept of pedagogy of the Dalton plan was born in 1905, when at the beginning of the work as a teacher Parkhurst faced the work with several classes at the same time. Then the concept of work was born, based on the implementation of the individual learning path. The effect of this action was undoubtedly the replacement of mass learning, and resulted in creating self-learning, which enabled children to learn at their own pace, and also stimulated cooperation with the application of the differentiation of student assessment by the teacher.

Helen Parkhurst, being a teacher of students with diverse intellectual abilities, decided to find a way to bring the standard and prevent difficulties by adjusting the pace of learning to the capabilities of each student. In 1914 Helen Parkhurst went to Italy, at the time she started cooperation with Maria Montessori. After four years, she returned to America and set about introducing a laboratory plan at a secondary school in the city of Dalton, Massachusetts. It is from the name of this city that the name “Dalton Laboratory Plan” was born.

This plan met with great interest from Belle Rennie from London – an English inspector and pioneer of innovative pedagogical ideas. The result of this cooperation was the wide popularization of the Dalton plan in England and other countries. In 1922, the Dalton Society was formed, whose main purpose was to promote this system. It should also be noted that the Dalton Plan was also born in Poland in secondary schools in Warsaw, Kamieniec, and Rydzyna. When it came to Europe, it should be remembered that schools implemented this system under the two names “Dalton education” and “Dalton plan”. Originally, schools implementing these assumptions were active only in the USA, England and the Netherlands . In Poland, the translation was published in Lviv, six years later in Poland by the editor Ksiaznica-Atlas.

Returning to the genesis of the Dalton plan in Europe, it should be added that the cooperation with Maria Montessori had a wide influence on the development of the Dalton education. On one issue, the ladies agreed with each other – differentiation of work with the student. This assumption will be the basis for the implementation of the plan and the Dalton education in the future. What’s more, the Dalton plan has changed over the years. The greatest influences can be seen in the Dutch and Polish pedagogy, but also in China.

It is Roel Rohner, who started the Polish, Czech and Austrian Dalton Association and is still spreading the value of the Dalton plan in Greater China.
To conclude, the main intention of Helen Parkhurst was to break with the current teaching system in which the teacher was the superior subject. She conducted her first experiment in a small elementary school as a young teacher in 1904. She noticed that when children are free to express themselves and help each other, their motivation increases to a large extent and they remember more.

In a later experiment, in 1911 and 1912, Parkhurst reorganized the education process in a larger school attended by students from 9 to 14. Instead of grades, a teacher and his own studio were assigned to each subject. Teachers from individual subjects created curricula and adapted them appropriately to the level of teaching a given subject to the student’s ability. On the other hand, the student was supposed to do a written work in a given subject before the end of the semester. In this way, the student had the opportunity to do their own work, as well as work at his own pace and plan his own work. The classroom was transformed into a laboratory in which the students did their assignments. Each workshop met the requirements of a given subject. It was fully equipped with useful and attractive learning materials; all subjects and books were placed within each student’s reach. Large tables replaced benches, to increase cooperation between students and work in groups. Thus, the implementation of the second experiment gave rise to the creation of further experiments, those in Dalton and New York from 1919. The only addition was the implementation of graphs and tables to work, which allowed students to track their progress in learning. From that moment on, this education was called Dalton plan .

In 1921 and 1922 Parkhurst explained the theory of the Dalton plan in a series of articles entitled “The Times Educational Supplement” also in her book “Education on the Dalton Plan”. Thus, the Dalton plan can be read as a “sufficient indicator”, a simple and economical reorganization of an educational institution . As Hallhurst said, standard teaching is inefficient , because the teacher does all the work. The Dalton plan “generates new conditions that enable the learner to learn” Learning is a different experience. Experience is the best and only teacher”.

The school, according to Parkhurst, should provide sufficient experience. This state cannot be achieved when the teacher gives all knowledge, and the students are only passive recipients of a given message, separated from each other, in no way communicating with each other, thus not sharing their experience, asking students for silence, making learning make them memorize and recite memorized messages in front of the class. Discouraged by the teaching plan at the time, Parkhurst had already described the main assumptions of the Dalton pedagogy, namely Freedom, responsibility, socialization and individualization of work at the lesson. The above-mentioned assumptions undoubtedly increased the motivation to learn both yesterday and today and enabled a new type of learning: learning through empiricism.

Helen Parkhurst Schools in the Netherlands