Inspired by the intellectual ferment at the turn of the last century,
educational thinkers such as John Dewey began to cast a bold vision of a new progressive American approach to education. Helen Parkhurst caught the spirit of change and created the Dalton Plan.

The ideas of Helen Parkhurst are even in our century a lasting inspiration for educators all over the world.

Under the Dalton Laboratory Plan we place the work problem squarely before him, indicating the standard which has to be attained. After that he is allowed to tackle it as he thinks fit in his own way and at his own speed. Responsibility for the result will develop not only his latent intellectual powers, but also his judgment and character.

What does a pupil do when given responsibility? Instinctively he seeks the best way of achieving it.

The Dalton Plan elicits a new response from the child’s nature by inviting him to undertake the job in a way that appeals to his natural desire to learn things in his own way and even in his own time.

He studies on his own responsibility in the company of his fellows, all persuing the same adventure. He forms the same kind of relationships in his school life that he will afterwards get in his business or professional life. He is learning by trying. 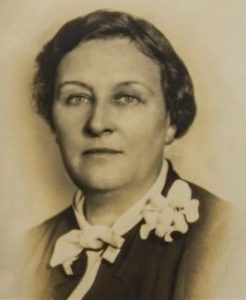 Helen Parkhurst based her plan on three starting points.
She mentions FREEDOM as the first principle and COOPERATION as a second one. (Education on the Dalton Plan, page 19)
A third element is the ASSIGNMENT .

That three-part plan continues to be the structural foundation of the Dalton education.
Without affecting the educational intention, the Dalton development in several countries shows a different practice of the three basic principles.

The Dalton School New York is using :
The House is home base in school for each Dalton student, and the House Advisor is parents’ key contact with the school. In the First Program and Middle School, House is comprised of students of the same age. In the High School, each House includes students from every grade level, a microcosm of the larger community. At all divisions the House Advisor guides and assists each student in the learning process.

The Assignment represents a contract between student and teacher.
Designed by each teacher for each class. The Assignment is a printed document that introduces the subject, makes suggestions for study and research, and defines common obligations as well as opportunities for individual projects. The Assignment provides the thematic focus for daily class and homework and may be individually tailored to meet specific needs and develop specific strengths.

The Laboratory best describes the educational atmosphere that Dalton stives to create which combines study, research and collaboration. “Lab” refers to the one to one and small group sessions between students and teachers which augment the traditional classroom instruction Lab is scheduled at specific times throughout the school day. 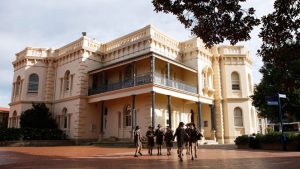 The Ascham School in Sydney / Australia is using more or less the same structure. Work is set in monthly assignments, divided into weekly units. A number of periods is allocated to class lessons and during the remaining periods, the teachers responsible for the academic subjects are available in their subject rooms for consultation (“LAB”) and the students are taught how to schedule the appropriate number of times a week to see teachers to discuss progress, get help or plan extension work. Once a week the whole work done by each student is reported to her Form teacher, and the ASSIGNMENT for each week is expected to be completed in each subject before the next week’s work is commenced.

The schools in Japan are in close contact with the Dalton school in New York.
Three schools for younger children have implemented the model from the First Program of New York.

The development in The Netherlands round 1930 was based on the same principles Helen Parkhurst used in the book Education on the Dalton Plan.
FREEDOM – COOPERATION – SELF-RELIANCE .

The first Dalton development started in secondary education, but short after the introduction some primary schools followed the ideas. Since 1985 the first Dalton K-12 schools were generated.

The first ‘Dalton planning board’ was introduced to give the young children the opportunity to make own choices and to decide the following order of their assignments during the weekly planning. 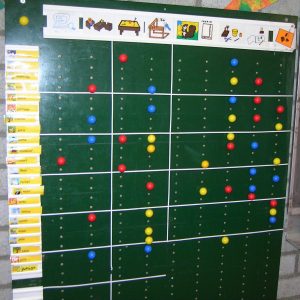 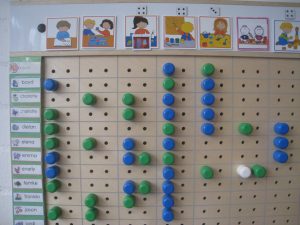 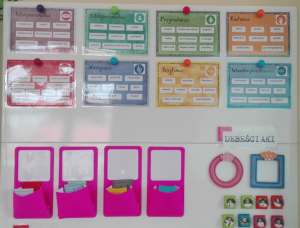 ‘Day-colors’ were introduced and ‘Day Rhythm Cards’ to indicate the following order of the daily activities.  With personal registration boards, the young children learn to be responsible for their own tasks.

The ‘Classroom task Board’ is visualising the co-responsibility for the classroom. 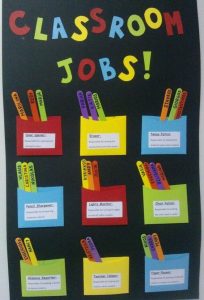 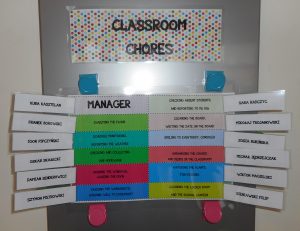 Hans Wenke, together with Roel Röhner author of five books about Dalton education, introduced RESPONSIBILITY as a standard instead of FREEDOM. Also Helen Parkhurst explained freedom as a development of responsibility.

In The Netherlands HOUSE is a common class arrangement. The classroom teacher is also the HOUSE advisor.

LAB one can find in the individual help and regular student – teacher (or small group – teacher) conversation. In many schools pupils from different ages help each other (tutor learning, mentor learning or learning with guiders). In primary education is LAB integrated in the HOUSE, in secondary eduaction in special Dalton (LAB) hours.

ASSIGNMENT is inherent to SELF-RELIANCE.
Training self-reliance is giving children as much responsibility as possible during their ASSIGNMENT work. Primary schools work with WEEK-ASSIGNMENTS, secondary schools mostly with MODULES.

In the Czech Republic started in 1996 a new development of the Dalton education based on the Dutch model. In Brno four schools implemented Dalton elements and started to create ASSIGNMENTS as a special part of the curriculum.

Dalton International initiated international conferences together with local authorities in Brno/CZ, Györszemere/HU, Zvolen/SK, Lengenfeld/DE, Vienna/AT, Zwolle/NL, Warsaw/PL and later in several other cities in Poland. These conferences  gave impulses for the start of Dalton implementation in many schools in these countries. These initiatives were leading to the founding of the official Dalton Associations in Austria, Czech Republic, Slovakia and Poland.

The vision of the Dalton Plan education in a contemporary educational system.

In 21st century educating the Dalton plan is one of the sources of changes, reforms in the field of the education system, its organization, program, process, textbooks and didactic means. All changes and innovations are aimed at improving the quality of the education process.

In this context, the pedagogy of the Dalton Plan in education of the twenty-first century must be considered. The Dalton plan plays an important role in the designing and implementation of all innovativeness, it is the basic category of an innovative approach to the education process.

According to the authors of the lexicon, it can be generally stated that” the Dalton School is a social institution, and at the same time the basic organizational unit of the educational system, whose mission is to educate responsible, independent children and young people” .

In contrast, the pedagogy of the Dalton plan can be understood in a broad and narrow sense. In broad terms it will be assumed that “every man has the creative abilities understood as the creation of works of art, technical, scientific and social activity, as well as the creation of himself. So, it is an action leading to educate creative, innovative, and socially intelligent citizens. In a narrow sense, we understand it as a valuable and still innovative educational process, aimed at socializing young people. However, it needs to be remembered that the educational process is not only a law, textbooks or a curriculum. Education is primarily a process between students and teachers.

For the student, it is the teacher who creates the educational process. Also, for Helen Parkhurst the teacher is a wizard of school reality. Based on the analysis of these concepts it can be generally stated that the modern Dalton school the educational institution, which trains and educates children and young people in an innovative way. The overriding assumptions and objectives of the Dalton school were disseminated by many educators, including Dewey and Rowid.

According to the definition of Rowid, the Dalton school is one in which the personal potential of the student is liberated, enriching and improving the life of the individual, and thus the whole society. The goal of the school is “raising a man who can create a better future, a perfect world and a more beautiful life” . Rowid emphasizes several important factors that stimulate the activity of the Dalton school, they are: independent acquisition of knowledge and skills, promoting health and physical fitness, taking into account social factors, displaying beauty, assertiveness expressed in the form of words, gestures, drawing, and the ability to self-education and self-improvement, individualization of the educational process, cooperation, responsibility and independence.

Therefore, it needs to be claimed that the main subject in the Dalton school is a pupil. The teacher a secondary subject that supports the student’s work. The Dalton plan, however, refers to the quality of both teacher’s and student’s work.